And this Democrat dirty trick is going to force Ron DeSantis to do one thing he’s never done before.

Warren publicly declared his refusal to enforce Florida law and even gave slaps on the wrist to ideological allies arrested under Florida’s anti-rioting law.

Now Warren is suing to get his job back and arguing he must compel DeSantis and his Chief of Staff James Uthmeier to testify.

Warren’s team fired back on Monday at the arguments made by Attorney General Ashley Moody and her team about whether the governor can be compelled to explain why he acted against Warren in August. Last week, Solicitor General Henry Whitaker asked a federal judge to block Warren from calling either DeSantis or James Uthmeier, the governor’s chief of staff, to the witness stand. Whitaker argued Warren’s team had enough information and evidence elsewhere to leave the governor alone.

Warren’s complaint read like a litany of anti-DeSantis talking points one would read on CNN or The New York Times.

“Never before has the governor of Florida suspended an elected official for his protected speech, held a media event at which he gloated about it, appeared on Fox News to continue to gloat about it, campaigned around the country for like-minded candidates while gloating about it, and then run away from court when asked to testify about it. Hopefully no similar case ever rises again. But if such a further case is necessary, the Governor should testify there, just like he should, if circumstances warrant, here,” the lawsuit read.

A red wave did hit blue states like New York where Republicans flipped four Congressional seats and came within five points of winning the Governor’s mansion for the first time since 2002.

And now Democrats want to make it as difficult as humanly possible for other Republicans to copy it or for DeSantis to run on it nationally in 2024. 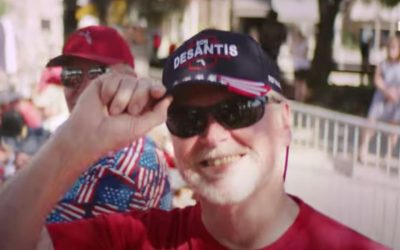