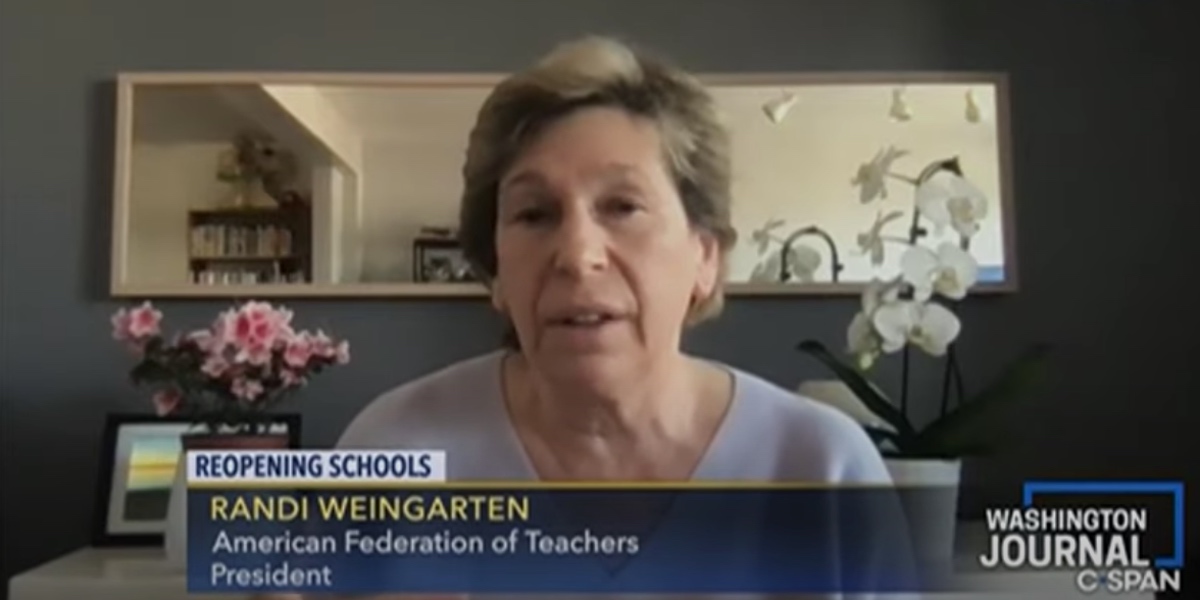 The Left’s preoccupation with using children as political pawns is becoming more and more pronounced.

That’s why Joe Biden unleashed his teachers union attack dogs on Ron DeSantis with this horrifying plan for children.

The Democratic Party and the teachers unions are one and the same.

They are completely reliant on one another.

Weingarten made an appearance on CNN to advocate for the vaccination of children under the age of 13.

Weingarten told CNN, “I think that there is a hesitancy right now, no pun intended, because we don’t yet have a vaccine for kids who are 2 to 12. I’m hopeful that that’s going to happen soon. But vaccines are a way of life.”

Scientific evidence indicates that young children are not at substantial risk of contracting the virus and are also not important vectors of transmission.

Despite the fact that this has been known for a year, Weingarten and other leftists are concerned with forcing vaccinations and injecting children in the name of “safety.”

As she carried additional water for “union Joe,” Weingarten used her appearance on CNN to attack Florida Governor Ron DeSantis, accusing him of disseminating “disinformation.”

“[W]e have to get through this terrible misinformation and the confusion that’s set up when you have a Governor in Florida who has somebody at a press conference who goes through complete disinformation as the governor is standing right there,” the union boss claimed.

Weingarten made it abundantly evident that she is operating as a hack political operative for Joe Biden, with the “disinformation” smear projecting her own actions.

DeSantis has advocated for vaccination freedom – the ability for free people to choose whether or not to get the vaccine.

The corporate-controlled press even went after him for guaranteeing that Florida’s elderly had the choice of getting vaccinated early since they were more likely to benefit from vaccines and have fewer side effects.

Naturally, the Left’s narrative was that DeSantis acted because he was appealing to an active voting bloc.

Democrats are furious that DeSantis has dared to question the effectiveness of draconian mask and vaccine mandates in curbing the spread of the virus.

The truth is, they don’t give a damn about the kids, and they make it painfully clear every day that the Left’s motivation is to gain more and more power over Americans.

Former President Bill Clinton is among the many Democrats looking to ruin Florida Governor Ron DeSantis. But even “Slick Willy” is learning that DeSantis is a hard target. And now Bill Clinton just made one prediction about Ron DeSantis that he is going to live to...

The corporate-controlled press is doing everything they can to destroy Ron DeSantis. They will even use the tragedy of Americans to try and beat him up politically. And The View’s Joy Behar and CNN’s Don Lemon launched vicious attacks on DeSantis during Hurricane Ian....

Hurricane Ian wreaked havoc on Florida after it made landfall as a Category Four hurricane on Wednesday. Apocalyptic scenes are emerging from all across the Sunshine State. And a reporter tried to politicize Hurricane Ian by asking Ron DeSantis one question that he...

California Governor Gavin Newsom is definitely running for President in 2024 if Joe Biden decides not to seek a second term. Newsom spent the past few months bolstering his status in the Democrat Party by constantly attacking Ron DeSantis. But Gavin Newsom just...

CNN pulled a dirty trick on Ron DeSantis. But the response will leave you grinning from ear to ear

New management is trying to pull CNN to the center. But it’s still the same old fake news CNN. And CNN pulled a dirty trick on Ron DeSantis. But the response will leave you grinning from ear to ear. Left-wing activists in the corporate-controlled press salivated over...