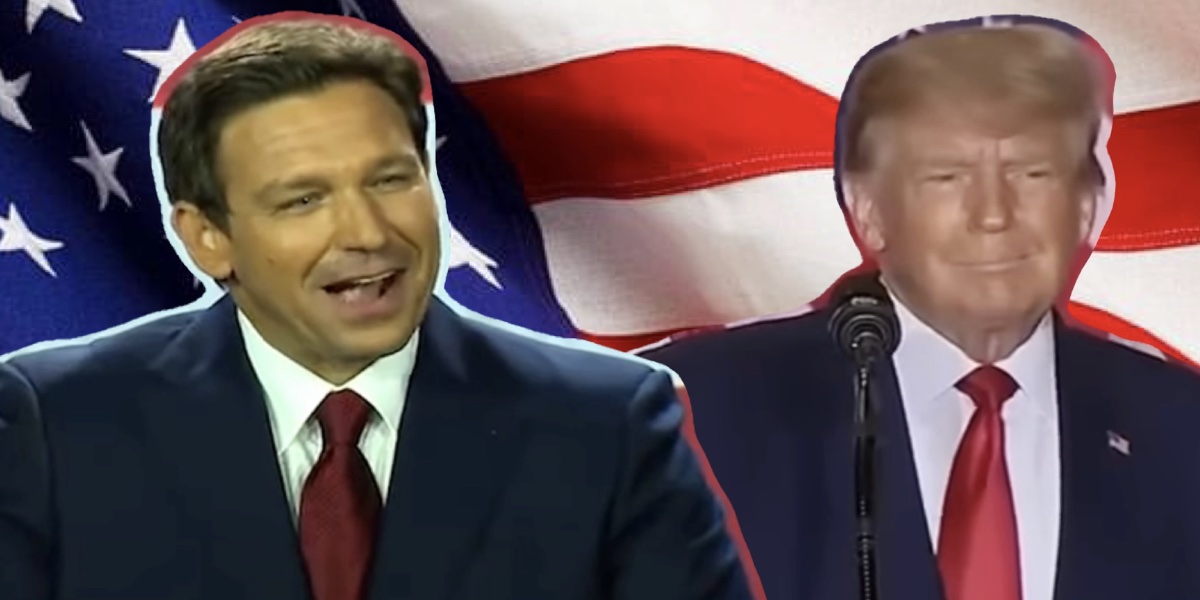 Following a lackluster showing from the GOP in the 2022 Midterms, the stakes are high for 2024.

And the top prize in the next election cycle is the White House.

And in the early goings of the contest, the Republican nomination is already starting to look like a two-man race.

Trump is the 2024 frontrunner

Many, if not most, Republican voters believe Joe Biden stole the 2020 Presidential election from Donald Trump.

For a large portion of those believers, the 2024 Republican Presidential nomination should be former President Trump’s if he wants it.

And he does – Trump wasted little time following the 2022 Midterms in announcing his third bid for the Oval Office.

A Morning Consult survey released this week found the 45th President of the United States is the first choice of nearly half of the party’s voters.

In fact, Trump scored 48% support in the poll, giving him first place by a wide margin.

However, there is one man quickly gaining ground on the former President.

America’s Governor didn’t only win his race, but now he also won over support from many Trump supporters who now want to see DeSantis as the next U.S. President.

Back in 2018, DeSantis barely escaped that election night as a winner.

Only about 32,500 votes – or 0.4-points – separated DeSantis from his radical-Leftist Democrat opponent, Andrew Gillum – who has since been indicted on federal crimes.

Since then, DeSantis has governed to the right of perhaps every other Governor in the country.

Doing so in a purple state would typically have conventional political wisdom suggesting DeSantis would be vulnerable in his re-election bid.

Democrats put up, possibly, their biggest name in the state to challenge DeSantis, in former governor, Democrat-turned-Republican-turned-independent-turned-Democrat Charlie Crist.

However, the race that was once considered a potential Democrat pickup, was a landslide.

And he did so while being enemy number one – or at least 1B – from the corporate-controlled media.

DeSantis even had the three hosts of the Oscars mocking him on national television.

But Florida is now a deep red state

And unlike other candidates, DeSantis had coattails.

Republican Senator Marco Rubio was supposed to be in a competitive re-election contest against Democrat Rep. Val Demings.

Instead, Rubio cruised to re-election by about 16.5-points.

That is an incredibly rapid transition from purple state to one of the reddest states in the country in just four short years – and he did so with conservative-populist governing.

And while DeSantis soared like Maverick from Top Gun on election night, Donald Trump’s attempts to play kingmaker nosedived – whether it was the former President’s fault or not.

Trump’s endorsement record looks good on paper, as he endorsed several dozens of candidates who were in no danger of losing.

But his record in competitive House, Senate and Gubernatorial races was spotted at best – with Dr. Oz’s loss to a man who could barely form coherent sentences coming to the front of mind for most political onlookers.

Along with Oz, Herschel Walker and Blake Masters also won their GOP primaries largely thanks to endorsements from Trump, only to fall short against their Democrat counterparts in the general election – costing Republicans their shot at taking back control of the Upper Chamber.

DeSantis is the only candidate even close to Trump

In the Morning Consult poll, DeSantis is the only candidate even within striking distance of the former President – with about a third of respondents throwing their support behind Florida’s Governor.

In fact, DeSantis scored 31% of the first-place votes.

That’s 79% of GOP voters who are backing either Trump or DeSantis – the only two choices who received double-digits.

Former Vice President Mike Pence is representing the establishment-wing of the party, but is in a distant third place with just 8%.

Liz Cheney’s non-stop witch hunt against Trump was enough to garner her 3%.

2016 GOP primary runner up, Sen. Ted Cruz of Texas and former U.S. Ambassador to the U.N. Nikki Haley both barely registered at 2%.

Virginia Gov. Glenn Youngkin was also listed as one of the choices, but he failed to garner even 1% from respondents.