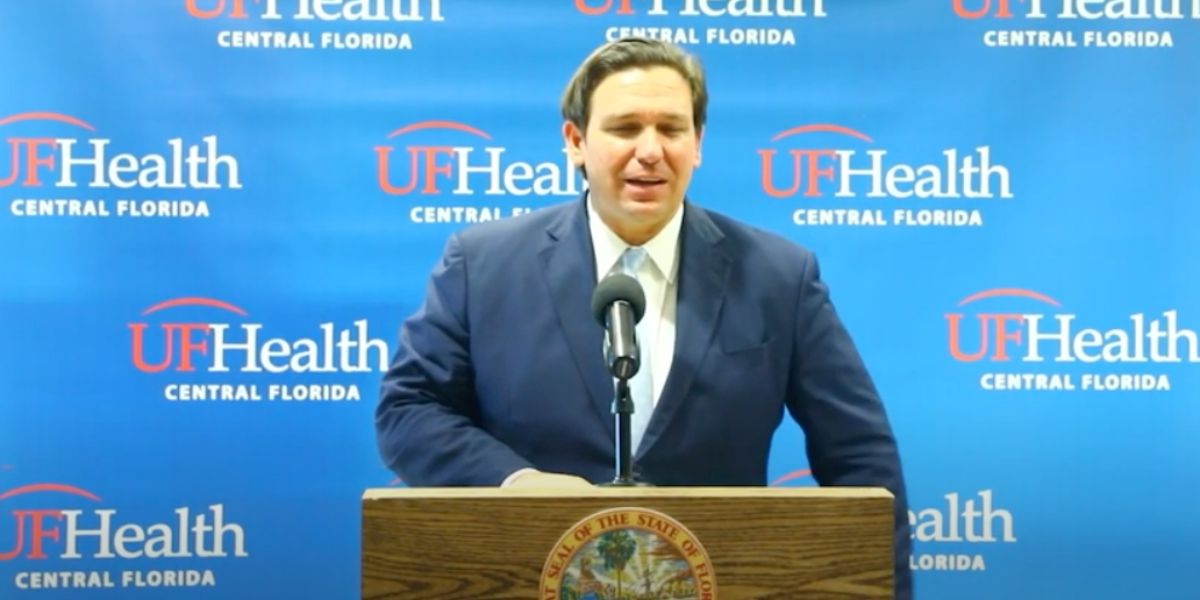 Many Americans have lost faith in the medical establishment.

And there is now a clear pattern of collusion between Big Pharma and Big Government.

But Ron DeSantis just fired a warning shot at the medical industrial complex and revealed his next steps.

No matter what else COVID wrought, one thing is certain, it changed the way Americans view healthcare.

The sense of betrayal many Americans feel towards drug manufacturers, the NIH, and even their own doctors, is unprecedented.

And in many areas the people are starting to fight back.

Investigate “any and all wrongdoing”

And leaders have started to emerge ready to take the fight directly to the medical establishment.

Leaders like Florida Governor Ron DeSantis, who has announced a multi-pronged approach to combating what he called the “medical industrial complex.”

First, DeSantis announced in December he was petitioning the Florida Supreme Court to convene a grand jury to investigate “any and all wrongdoing” with respect to the COVID-19 vaccines.

The announcement sent shockwaves in the political and medical communities but was a welcome announcement for millions of Americans.

And it wasn’t just talk.

The Supreme Court empaneled a special grand jury in late December to do just that.

But America’s Governor wasn’t done yet.

He let it be known he would be introducing legislation to take on the medical industrial complex and their control over Floridians.

DeSantis’ proposal was revealed at a news conference in the Villages community.

Florida, of course, has a large and growing population of retirees and the elderly so drug prices are a top concern.

His plan would prohibit pharmacy benefit managers (PBMs) from forcing patients to use a mail-order pharmacy, while keeping the option available to them.

PBMs would also be barred from forcing patients to use a small network of affiliated pharmacies.

The DeSantis proposal would also protect the ability for patients to have in-person relationships with pharmacists in their own communities.

And his legislation would protect small businesses from surprise bills and after sales fees from PBMs after prescriptions are already filled.

It would also prohibit the practice of a PBM charging a patient more for a prescription than it really costs and then pocketing the difference.

PBMs would be subject to enforcement action by the Office of Insurance Regulation if they violate state law.

Big Pharma under scrutiny as well

They would also be required to be fully transparent when it comes to drug pricing and be required to submit an annual report that outlined and justified any cost increases over the past year.

“So, we have worked hard to do whatever we can, to provide relief from the cost of prescription drugs,” DeSantis said.

DeSantis is working in other ways to help bring down drug prices through the free market.

More than two years ago, Florida submitted a “Canadian Drug Importation Program” to the federal government for approval.

Not surprisingly the U.S. Food and Drug Administration has yet to approve it.

The Governor noted that the “medical industrial complex” in the United States was imposing high costs on American consumers that are not imposed on consumers in other countries.

“This has been ready to go, literally all they have to do is sign on the dotted line, and basically what they’re saying is, ‘well, you know, if you buy the same drug in Canada, we’re really concerned about safety and all this other stuff,'” DeSantis said.

As usual DeSantis nails it.

That is exactly why millions of Americans are no longer trusting of the medical establishment.