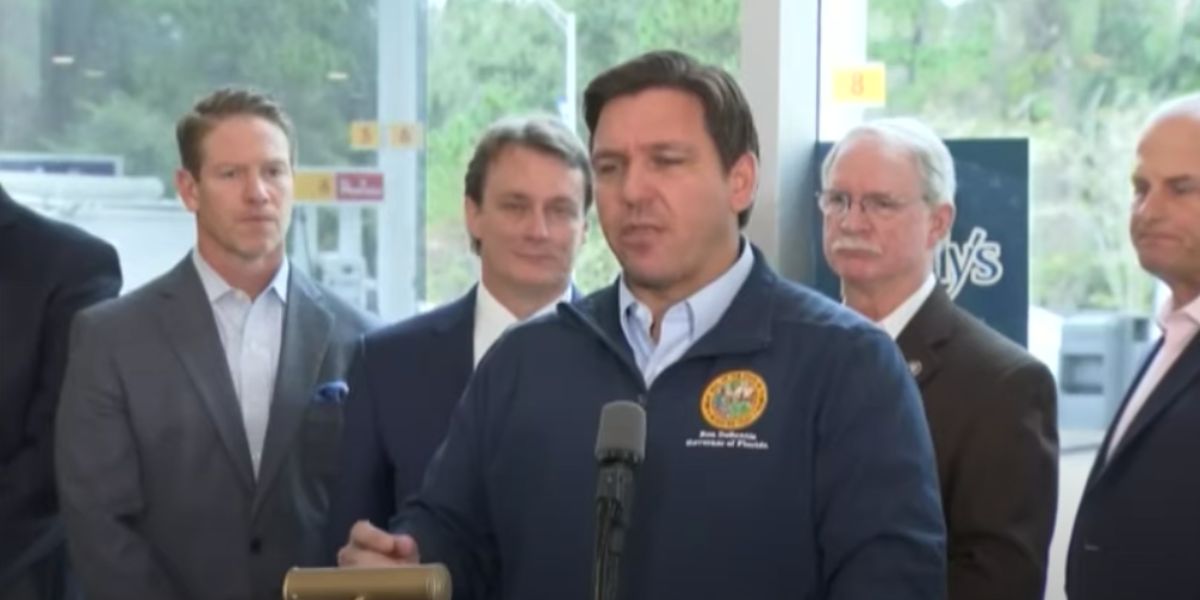 Ron DeSantis spent the past two years showing Republicans how to fight and win against Democrats and the Left’s woke ideology.

Now DeSantis is showing the GOP how to put America First.

That’s because Ron DeSantis just put the elites at the World Economic Forum on notice about pushing their globalist policies in Florida.

52 heads of state and government, nearly 600 CEOs, and other powerful elites are headed to the Swiss town of Davos next week for the annual meeting of the World Economic Forum (WEF).

Founded in 1971 by Klaus Schwab, the WEF is a group of elites who meet annually to discuss what the globalists in the group believe are the most important issues facing the world and then offer solutions to these alleged problems.

However, the reality is that the elites at the meeting plan and scheme ways to gain more control and power over the entire planet.

They use their money and power to try and buy off politicians at all levels of government to push their globalist agenda into law.

The WEF is behind the anti-fossil fuel agenda that Alexandria Ocasio-Cortez and other leftists are trying to force on the American people.

So it was no surprise when the WEF recently declared so-called “climate change” the most pressing concern facing humanity and announced it would be the top issue of discussion in Davos.

When discussing the 2023 meeting, founder Klaus Schwab said that Communist China will likely serve as a “role model” for many countries as the global community embarks upon a “systemic transformation of the world.”

But Florida Governor Ron DeSantis just put the elites at the WEF on notice about trying to bring their anti-fossil fuels, socialist agenda to the Sunshine State after the meeting.

“They do this thing in Davos, they’re doing it next week, all of these elites come in, the World Economic Forum, and basically their vision is – they run everything and everybody else is like a serf – a peasant,” Desantis said at a press conference on Tuesday. “They’re going after energy, ESG, and all of these other things.”

DeSantis then ripped Joe Biden for going along with the WEF’s radical environmentalist policies, particularly his new push to ban gas stoves in America.

“Did you see that the Biden administration wants to nix gas stoves?” DeSantis said. “Are you kidding me?” he continued, before adding, “I want gas stoves.”

DeSantis mentioned the hurricanes that wreaked havoc across Florida last year and how much worse it would have been for people without gas stoves.

“Imagine how many people had the hurricane come through, didn’t have power right away but were able to turn on – so you cannot go down this road, but that’s exactly what they want to do and it’s really weakening western society, western values,” DeSantis continued.

He also called out the WEF for serving as a “puppet” of the Chinese Communist Party (CCP) and President Xi Jinping.

But DeSantis ended with a stern warning to the elites at the WEF.

“That type of stuff coming out of Davos?” DeSantis said. “Those policies are dead on arrival in the state of Florida,” he declared.

"Xi [Jinping] is really kind of the puppet behind the curtain on a lot of this stuff […] That type of stuff coming out of Davos? Those policies are dead on arrival in [Florida]." pic.twitter.com/bUTtrn1Wi9