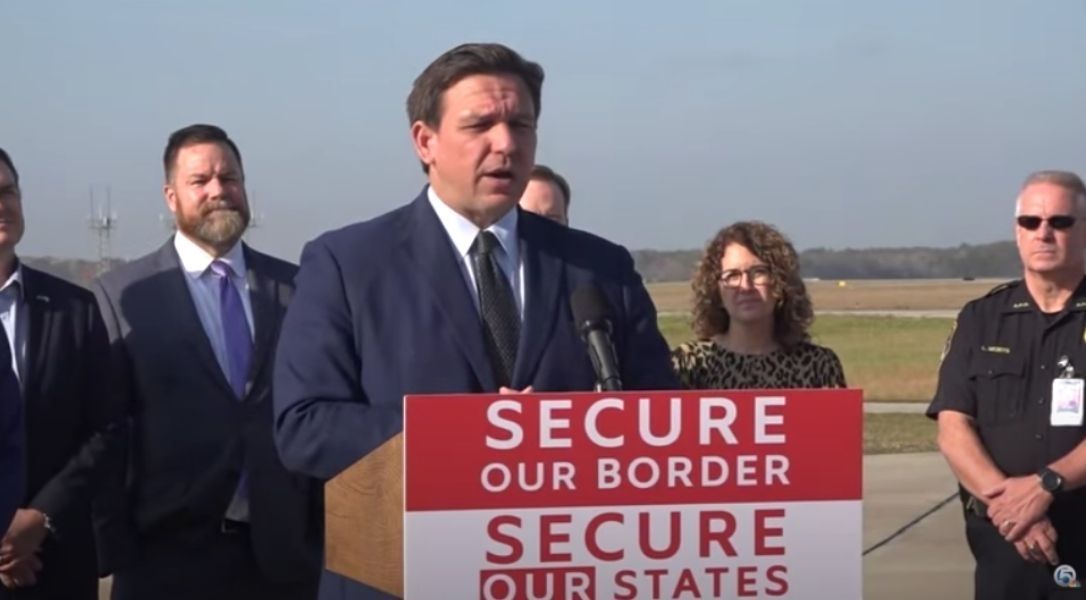 The situation at the border is out of control.

But Democrats refuse to do anything to solve the crisis.

And Ron DeSantis just offered a new proposal for dealing with illegal aliens that will leave Barack Obama and Joe Biden fuming.

As a result of the Biden administration’s open borders policies and pro-amnesty rhetoric, the border crisis is growing worse by the day, with nearly 200,000 illegal aliens crossing the border and entering the United States every month.

Polls show the border crisis is one of the top concerns of most voters heading into the 2022 midterm elections.

But the Biden administration is refusing to take action to address the problem.

That’s why a number of Republican Governors across the country are taking matters into their own hands and working to solve the illegal immigration crisis in their states.

One of these Republican Governors is Ron DeSantis.

Right now, of the roughly 11 to 22 million illegal aliens estimated to be living in the United States, more than 775,000 illegal aliens reside in Florida.

Only California and Texas have more illegal aliens than Florida.

That’s why Governor DeSantis recently announced a series of six actions he plans to take against Biden’s “reckless border policies,” including cutting state ties with facilities housing illegal aliens and outlawing business with the non-governmental organizations (NGOs) that aid in illegal immigration.

DeSantis is also asking the legislature for $8 million to transport illegal aliens out of Florida as part of his budget proposal.

And during a press conference announcing the proposal, DeSantis jokingly stated that he wants to use the money to transport illegal aliens to Delaware and Martha’s Vineyard, where Obama and Biden own houses.

“In yesterday’s budget, I put in $8 million for us to be able to transport people here illegally out of the state of Florida,” DeSantis said. “It’s somewhat tongue in cheek, but it is true, if you sent them to Delaware or Martha’s Vineyard or some of these places, that border would be secure the next day.”

Even though DeSantis jokingly made the statement, if Joe Biden continues to ignore the border crisis, it wouldn’t be surprising to see DeSantis actually send a busload of illegal aliens up to Delaware and Martha’s Vineyard.

Ron DeSantis put the Left on notice that he would not tolerate drag dancers performing in front of children in Florida. Leftists thought he was bluffing. But Ron DeSantis just dropped the hammer on one venue for allowing children to attend a sexualized drag show. Over...

Right now, Donald Trump is the lone Republican Presidential nominee for 2024.  But looks like Donald Trump’s status as the only candidate is about to change and sooner than anyone could have expected.  And Ron DeSantis is poised to make one stunning announcement that...

Florida Governor Ron DeSantis is an emerging national leader of the Republican Party. And as speculation mounts that DeSantis will launch a Presidential campaign this summer, the big question remains as to if DeSantis can win. Now Ron DeSantis just got compared to...

Hurricanes Ian and Nicole wreaked havoc on Florida last fall. Joe Biden’s FEMA denied assistance to many victims out of spite for Ron DeSantis. But Casey DeSantis just made a huge announcement about the Florida hurricane victims Joe Biden’s FEMA refused to help....

Ron DeSantis is waging war on the woke Left’s control of education. The media is in a frenzy over it. But even MSNBC viewers were floored by this disgusting accusation one contributor levied against Ron DeSantis. Ron DeSantis recently sent the Left into a tizzy when...