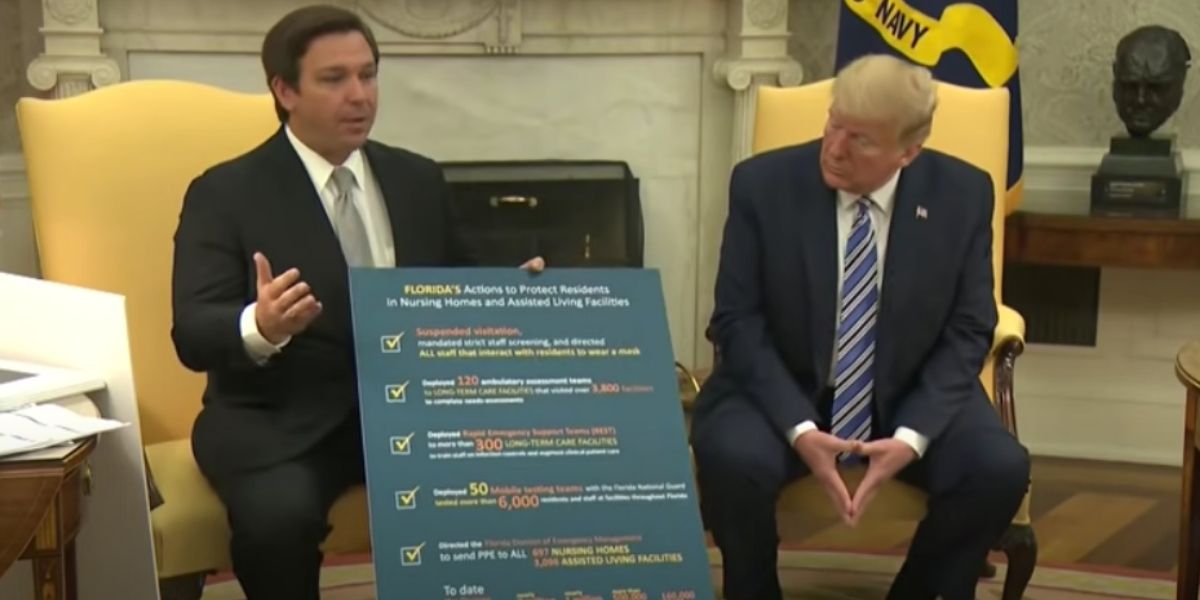 Donald Trump and Ron DeSantis are the two most popular Republicans nationwide.

But what if they both decide to run for President in 2024?

Well, you won’t believe the shocking prediction one top Republican legislator in Florida just made about Donald Trump’s political future.

Outside of Donald Trump, there is no Republican more popular with GOP voters nationwide than Florida Governor Ron DeSantis.

Poll after poll shows that should Donald Trump decide not to run for President again in 2024, Ron DeSantis would be all-but guaranteed to win the GOP nomination.

With both DeSantis and Trump wildly popular with Republican voters, political pundits are beginning to wonder what will happen if they both run for President in 2024.

Of course, given that Trump and DeSantis are close political allies, most folks believe that only one of the two will seek the 2024 GOP nomination.

But in a recent interview with WJNO South Florida radio, host Brian Mudd asked Donald Trump about the potential of facing DeSantis in the 2024 Republican Primary.

Trump responded by saying that he doesn’t believe DeSantis will run if he does, but if the two of them did happen to face off in 2024, he would certainly “win by a lot.”

“I’ll be the first to go on record here,” Roach tweeted in response to Trump’s comments.

Roach then said he believes Trump will not run for President in 2024, but if he does, “DeSantis would win a Presidential Primary against Trump.”

“1. Trump will not run in ‘24. 2. DeSantis runs for President regardless. 3. DeSantis would win in a Presidential Primary against Trump,” Roach tweeted.

Roach then clarified his statement by noting that he is a fan of Donald Trump, but believes that “DeSantis represents the future of the Republican Party.”

“I believe a wide and diverse swath of Americans support the America First agenda formulated by President Trump, and I will always admire his courage in delivering on so many promises that were just platitudes for many of his predecessors,” Roach tweeted. “But I believe that Ron DeSantis represents the future of the Republican Party.”

Of course, right now no one really knows whether or not Ron DeSantis or Donald Trump will run for President in 2024.

Ron DeSantis is currently running for re-election for Governor.

And until the 2022 race is over with, DeSantis calls any talk of him running for President in 2024 “nonsense.”

Ron DeSantis is leading the charge in Florida to take back control of education from the woke Left. Democrats and the left-wing activists in the media are in a frenzy.  But jaws hit the floor when a Democrat official in Florida used this one word to describe the black...

Donald Trump and Ron DeSantis look like the top two contenders for the 2024 GOP presidential nomination. Trump is in the race and DeSantis is rumored to jump in this summer. But now Ron DeSantis finally did the one thing that Donald Trump never expected. Ron DeSantis...

Elon Musk’s Twitter Files proved that Big Tech colluded with government officials behind the scenes to censor conservative speech online. But censorship of conservative speech extends beyond the realm of social media. And Ron DeSantis just urged House Republicans to...

Ron DeSantis promised to ensure Florida’s “institutions of higher learning are focused on academic excellence and the pursuit of truth” during his inaugural address. Now DeSantis is proving that he meant business. And all hell is breaking loose after Ron DeSantis...